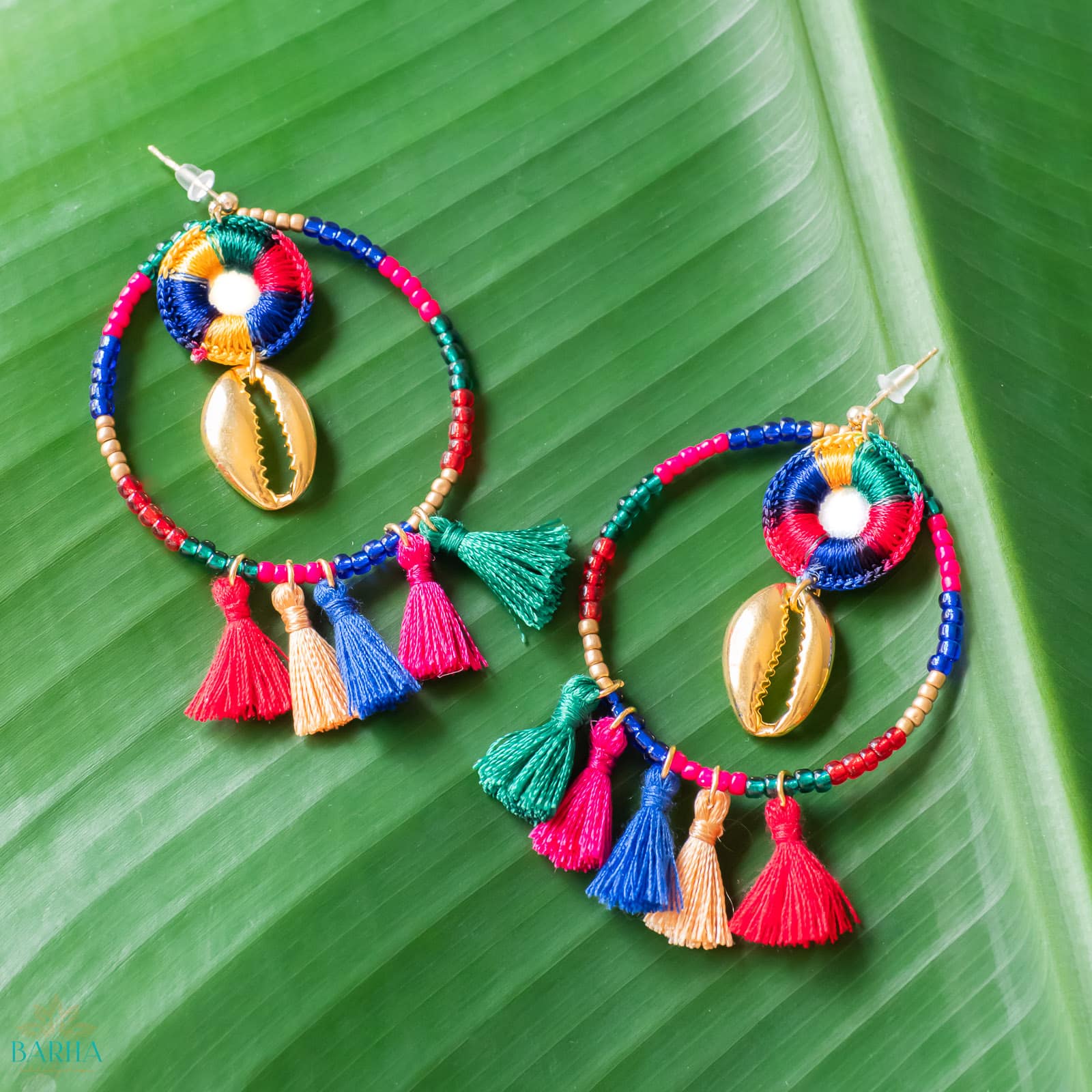 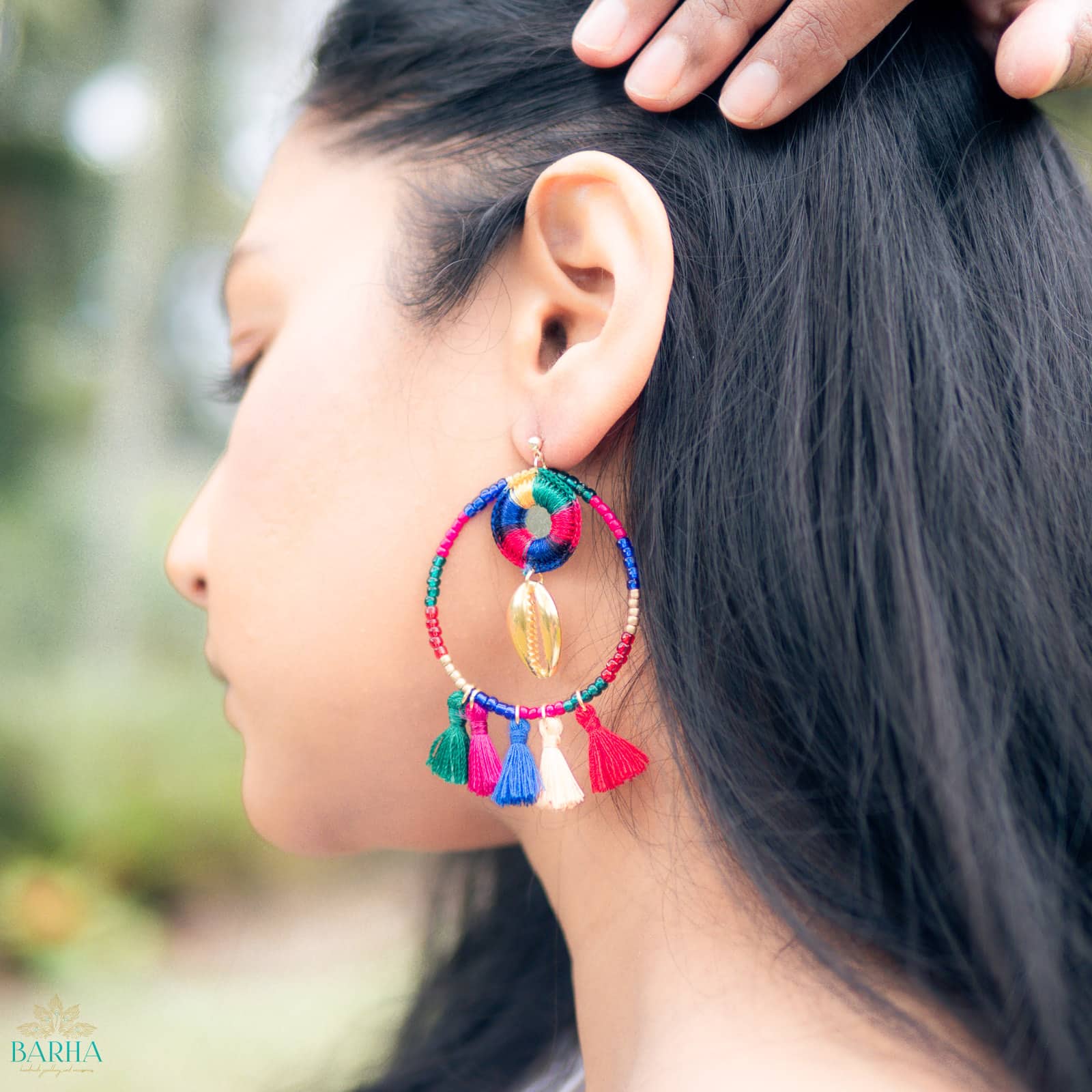 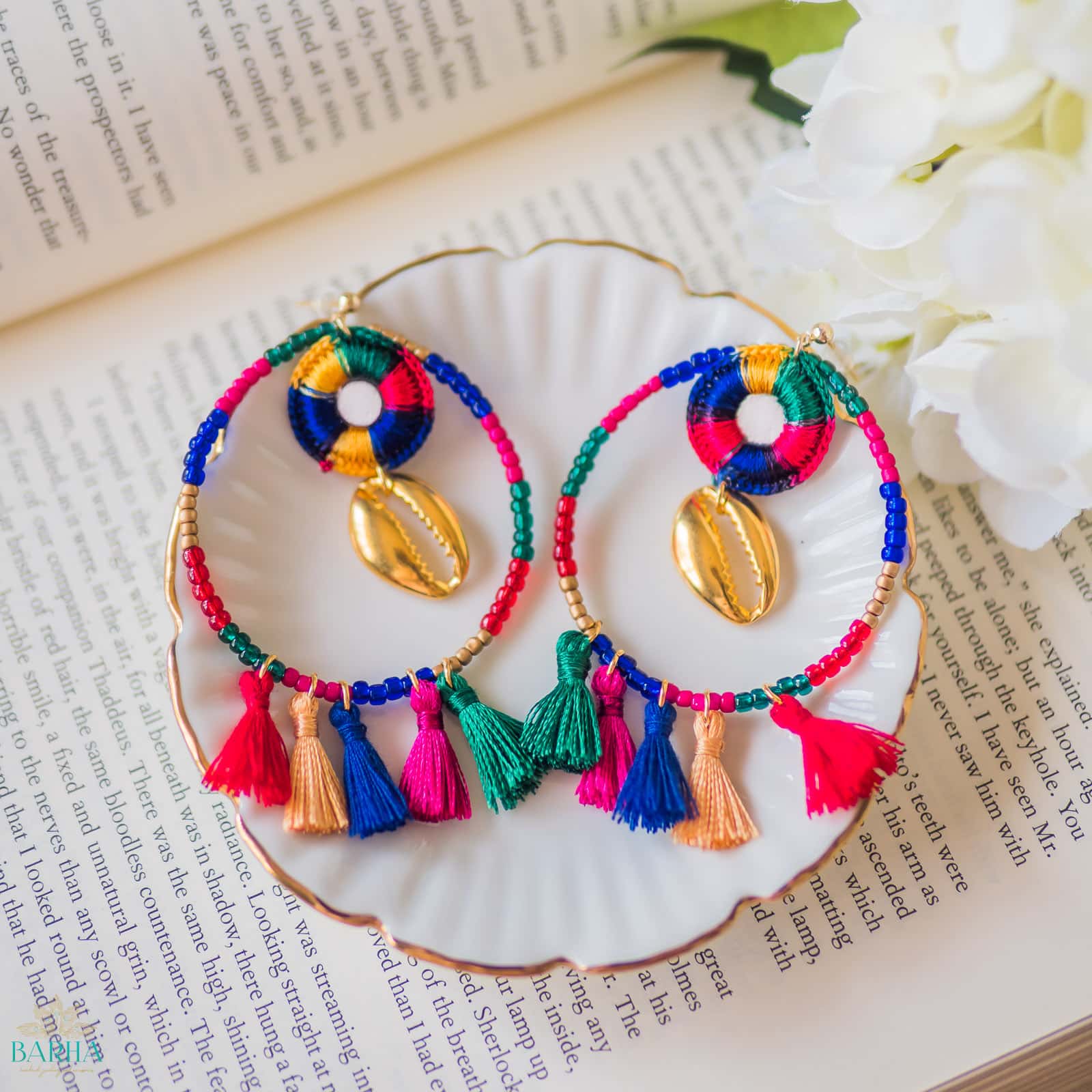 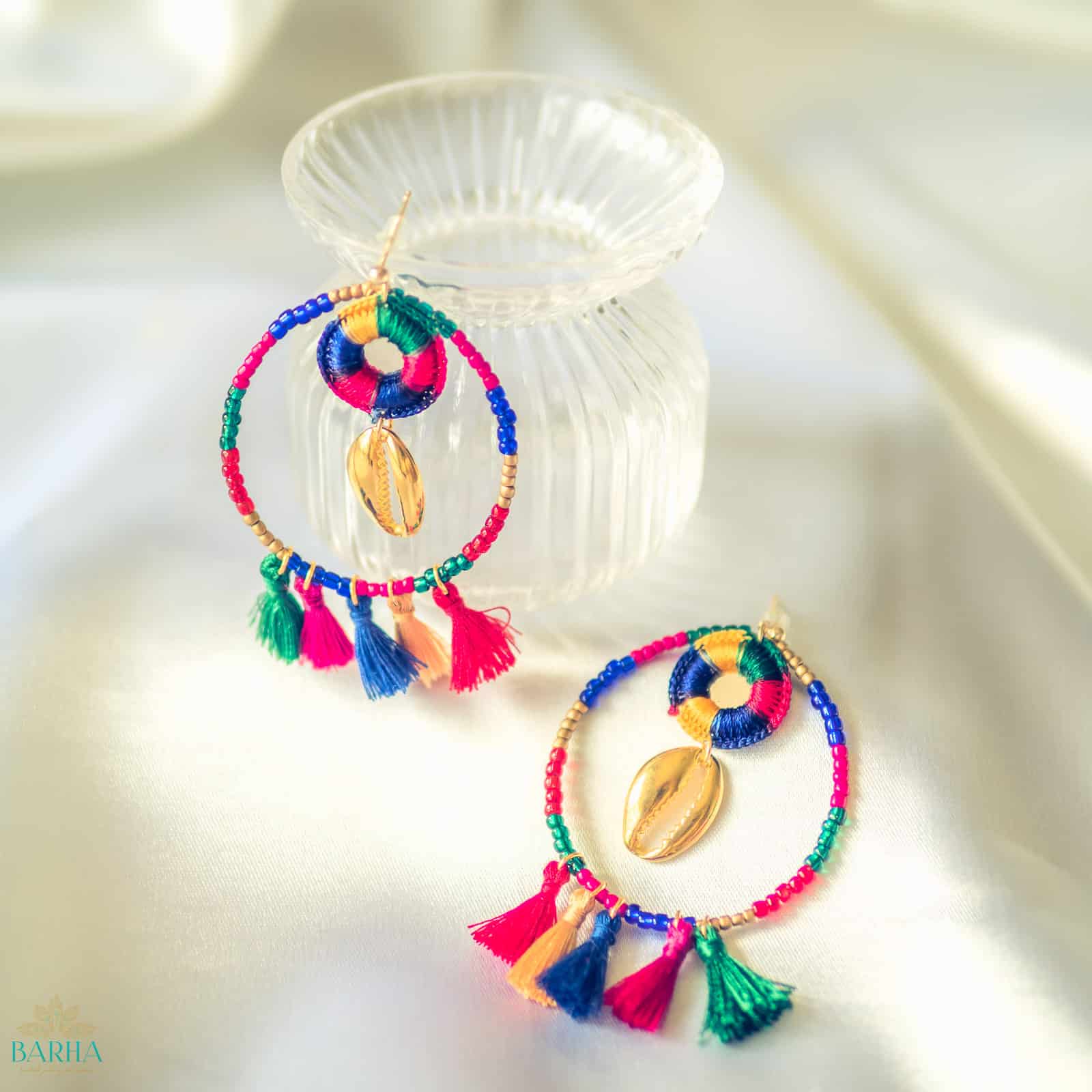 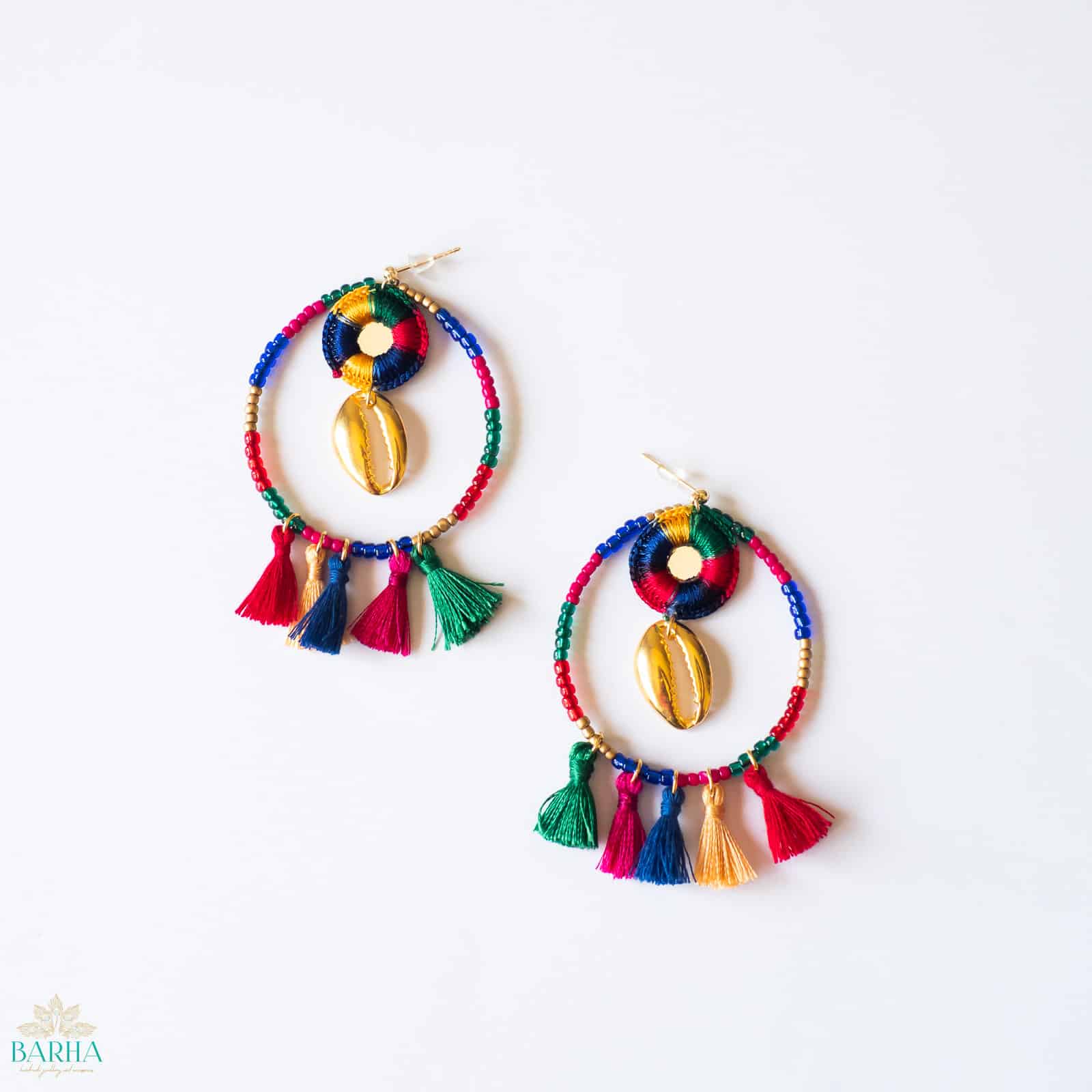 Utsav, Hindi for celebration or festival, is a vibrant and colourful pair of earrings that mimics Indian festival and celebration jewellery. Based on the playful jewellery worn by brides at their Nelangu’s, the colourful folk dancers of Rajasthan, and during joyous occasions like Navratri and Diwali.  Indian festival jewellery often includes bright colours, Indian shisha mirror work, pompoms, colourful beads, and seashells.

The most common seashell found in Indian celebration jewellery is the cowrie shell, or kauri/kaudi shell. In Hindu mythology during Samudra Manthan (churning of the cosmic ocean for the elixir of immortality), when Goddess Laxmi appeared from the ocean, kauri shells accompanied her. Since then, kauri shells have been associated with Goddess Laxmi who is the deity of wealth, prosperity, and abundance, making the kauri shell holy and auspicious. During Laxmi puja (prayer) kauri shells are often offered to the Goddess. The Indian Ocean has an abundance of kauri shells that wash up onto the Indian shoreline, during ancient times the kauri shell was used as money, and it has been said that it was one of the most successful forms of currency. For this reason, it has since been considered a symbol of wealth. Kauri shells are said to bring positive energies, prosperity, wealth, luck, and dispels evil intent of others, and are therefore often included in the wedding attire of brides.

Indian shisha work or mirror work is a type of embroidery in which small pieces of mirrors or reflective material are stitched around with silk cotton to create bright and shimmering charms that were initially created to mimic precious jewels.

Length: 7cm (from earring stud to end of tassel).